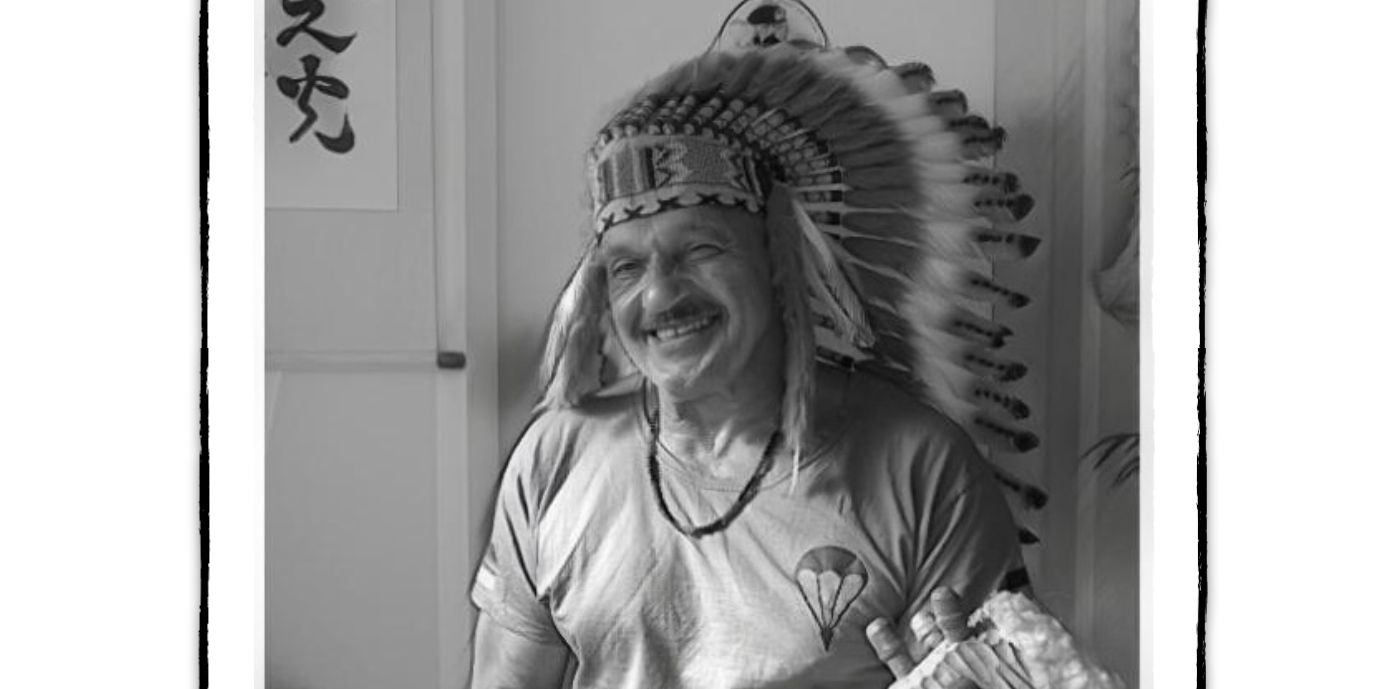 When I started my training in Manfred’s old school on Großen Kolonenweg in the mid-90s, his student Detlef Zimmermann had already taken over the school from him. So I was not able to experience Manfred personally at first. But in the corridor of the school there was a big photo wall that you had to pass every time. Before and after the training, I often stood in front of it and looked at the pictures, which quasi documented the history of the school. On this photo wall hung numerous pictures of various courses, training camps and snapshots from Detlef’s time at school. Among them were also some pictures of Manfred.

With a large part of these photographs Manfred must have been in his 30s and who knew him from this time, he knows that he was in his best times a more than impressive appearance. Muscle-bound, sun-tanned, mostly in a sleeveless training shirt, his classic mustache, sometimes looking grim. Someone you wouldn’t meet at first glance in the dark at night and wouldn’t want to annoy.

I was all the more surprised when I met Manfred for the first time at a course in physioenergetics (a special form of kinesiology). What struck me directly was that his voice didn’t fit to his quite intimidating appearance. His voice was friendly, open, with this light Berlin accent and always very humorous. At first this voice made me think more of Peter Lustig von Löwenzahn, especially when he explained something in an enthusiastic way. I am sure Manfred would have laughed at this comparison.

Incidentally, this first encounter had a decisive influence on my own future life. After the course I decided directly to study physioenergetics and got to know Rolf Krieger, in whose practice I was able to work in Idar-Oberstein for several years. Through him I also came to chiropractic and later to osteopathy.

In the following years I met Manfred again and again at various seminars on holistic medicine and was able to persuade him, among other things, to lead a weekend seminar in the field of equine osteopathy in Idar-Oberstein.

Rolf Krieger, who had known Manfred for a long time, had informed me about Manfred’s eating habits and I knew that he likes to eat hot. Among other things, he had told me about Manfred’s preference to eat a portion of Korean kimchi for breakfast.
Anyone who has ever tried a kimchi soaked in garlic will not forget the taste and spiciness for the rest of his life. The idea of eating something like this for breakfast drives me to tears in my eyes today. But for Manfred this didn’t seem to be a problem. But when he ate the ornamental pepperonis from the flower pot on the restaurant table with obvious pleasure during the dinner together, there were no questions left unanswered.

A few years later I had planned another practical seminar with him. I travelled to Hanover with two colleagues from Düsseldorf, who did not know Manfred yet, to work together with him on some concepts for posture diagnostics.

Anyone who has ever been to Manfred’s practice knows how special his preferences regarding interior design were: the Indian totem pole in the middle of the entrance area, an open parachute in the corner of his treatment room, the medical skeleton with Indian chieftain’s headdress, the picture walls with photos of various individual fighter seminars, shooting and weapons training or of his parachute jumps. For a while there was also a terrarium with a snake and a tarantula in the waiting room. All this could irritate one or the other patient for a long time. But again and again it was Manfred’s friendly manner that quickly put the martial exterior into perspective.

On that day, when I went to Manfred’s practice with the other colleagues who hadn’t known Manfred personally, he greeted us in the courtyard, dressed in camouflage trousers, muscle shirt of an Escrima school and a freshly shaved mohawk. One can imagine the irritation of the others well. After all, they had expected to meet a specialist in the field of holistic medicine, and the sight of Manfred visibly disturbed them. I think that was exactly the intention Manfred had: Irritation makes new patterns of thinking possible.

2 years ago I had the opportunity to do a longer interview with Manfred in the course of our work on the Chinese Boxing Book. Today I am very grateful for this moment, because the conversation was extremely interesting and offered once again a chance to take a look at his really eventful and in many ways extraordinary life.

Manfred has inspired a lot of people with his own way, has been a mentor for many people, has shown many others the way with his skills and profound knowledge in the field of martial arts and has been able to help many people in his practice for holistic medicine.

Whatever Manfred started, he usually followed until he had completely penetrated it for himself. Then he went on. Some people reproached him for this, were perhaps disappointed that he did not always stay in one place, with only one thing. I think, however, that Manfred was always aware that nothing remains in life as it is, but that everything is always in a state of flux and constant change and that this is exactly the basis for a constant further development. Everything else would have meant stagnation for him and I don’t think that would have corresponded to his nature. I have always experienced Manfred as a curious, open-minded and interested person and I want to believe that he lived a full life and achieved more than most of us.

We will all miss you very much.
Farewell Manfred!